When you think of sharks, your first thought may be that they are frightening, but are they really the terrifying predators we think they are? Or, are they just misunderstood? Whilst some species, like the great white shark or tiger shark, can be a threat to humans, in reality there are over 500 species of shark, and they range in size from the smallest dwarf lantern shark, which is 20 cm long, to the largest – the whale shark – which reaches 40 ft in length and feeds on tiny plankton.

Today is shark awareness day, which seems like a good opportunity to celebrate these awesome ocean-dwelling creatures with a few fascinating, and sometimes myth-busting, facts! For example, did you know that you are more likely to be killed by a falling coconut than a shark? 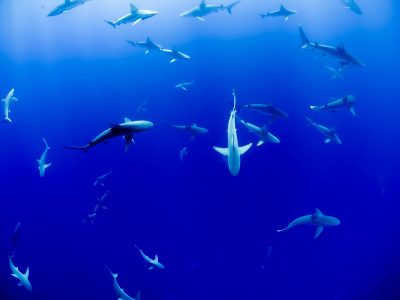 Firstly, what are sharks? They are cartilaginous fish, which means their skeleton is made of cartilage rather than bone. Cartilage is lighter and more flexible, which enables sharks to swim faster, use less energy and to turn quicker – increasing their predatory skills.

Living in the ocean can be tough. Little light reaches the deep murky waters, so to survive marine animals often end up relying on other senses. Sharks are no different, they have an excellent sense of smell, and they can even sense vibrations and electrical signals.

Sharks role in the ecosystem

Sharks are often at the top of the food chain, so essential to controlling prey population numbers. Not only do they tend to prey on weak or sick animals, which keeps prey populations healthy and gene pools strong, but removing large numbers of sharks, has the potential to cause other species numbers to increase, which can have negative impacts on the ecosystem as a whole. For example, in some areas, reducing the numbers of sharks can increase the amount of sea turtle grazing on seagrass, which is detrimental to the health of seagrass beds. This in turn, can have negative impacts on climate change because large amounts of carbon are released into the atmosphere.

Humans are not prey for sharks

Whilst sharks have been known to attack humans, it may surprise you to know that humans are not their natural prey choice. Only a handful of species are considered dangerous – the great white shark, hammerhead shark, tiger shark, mako shark and bull shark. And, often when sharks attack it is a case of mistaken identity. To a hunting shark, it is not always easy to tell the difference between a surfer or a seal, which they would prey on naturally. Bites are often exploratory to see if what they have found is food, or attacks could be a form of defence. Sharks are extremely territorial and will attack to defend or protect themselves and their territory. But, even so, far more sharks are killed by humans than humans killed by sharks, and we are still more likely to be crushed by flying champagne corks!