Whether for medicinal purposes or as status symbols, rhino horns are in demand. All five species of rhino (Black, White, Sumatran, Javan and Greater One Horned) are at risk of extinction yet they are still poached to meet the demand for their horns. In fact, between 2007 and 2016 records show that 6,115 rhinos were killed by poachers in South Africa, although records are not the most accurate so it is likely to be more. But, despite the widespread myths, the only animal that has use for a rhino horn is the rhino itself – it is no benefit to humans whatsoever.

September 22nd is World Rhino Day, so now is the perfect time to dispel some myths about the rhino horn. Started by WWF-South Africa in 2010, World Rhino Day is now celebrated internationally and aims to protect all five rhino species from extinction.

1. Rhino horns do not have medicinal properties

For centuries, rhino horn has been a key ingredient in Traditional Chinese Medicine. Ground up and added to water with other ingredients, it is believed to cure many illnesses and fevers and can apparently detoxify the blood. But, in fact, rhino horns are made of keratin – the same protein as our hair and fingernails – and, as research has shown, have no medicinal properties at all. In 1993 China banned the illegal trade of rhino horns but poaching suggests it is still used today, although it is more a matter a tradition than medicine.

Whilst there has always been a demand for rhino horn as a cure for illnesses, it shot up in 2008. And, it is thought that the sudden increase is linked to rumours that spread across Vietnam that rhino horn had cured a politician’s cancer. This is not the case – rhino horns are made of keratin and cannot cure cancer!

Worryingly, nowadays rhino horns themselves and products made from rhino horns are being collected by the wealthy and displayed and worn as a show of status, importance and power in the same way a car or watch would. There are many jewellery and ornament alternatives that look far better than rhino horn when displayed in the home or on our wrist, so using rhino horn for this purpose is completely unnecessary. 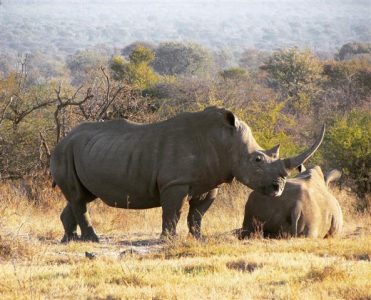