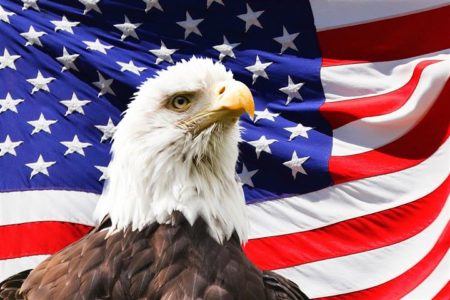 What is National American Eagle Day?

National American Eagle Day commemorates the day in which the bald eagle became the symbol of the United States in 1782. The day provides an opportunity to celebrate the cultural ideals that the bald eagle stands for and also its great conservation success. It is a symbol of strength, freedom and independence. They are also the only eagle species unique to North America and are present in all states except Hawaii.

About the bald eagle 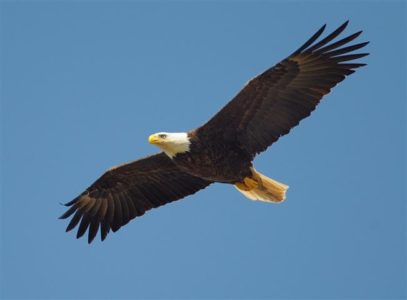 Bald eagles range throughout North America, spending their breeding season in Canada and Alaska and the non-breeding season in the lower 48 states. They prey on fish, smaller birds and rodents or scavenge for carrion. Eagles are incredible hunters; when diving for prey, they can reach speeds of up to 100 miles per hour and spot a rabbit running up to 3 miles away.

When an Eagle finds a mate, they remain with each other for life, but if one dies the remaining eagle will find a new mate. During the breeding season, each pair builds a nest that weighs about a ton and measures up to 8 ft across; females typically lay 1–3 eggs. Over 50% of eagles die within the first year of their life, but, if they make it to adulthood, they can live for up to 20 years in the wild.

In the late 1900s, the bald eagle was on the brink of extinction but is now one of the USA’s most successful conservation efforts. In 1782, the year it became the official symbol, there were around 100,000 breeding pairs in North America. By 1963, just under 200 years later, there were just 487. Numbers plummeted mainly due to habitat loss, loss of prey and DDT, a chemical used widely after WWII to kill crop-eating insects. However, it’s excessive use led to it running into waterways where it contaminated fish, that were subsequently eaten by eagles. This chemical built up in the eagles and caused them to lay thin-shelled eggs that would break before they were ready to hatch.

In the late 1960s, bald eagles made it onto the endangered species list, and conservation efforts began. A large factor in their recovery was the ban of DDT in 1972, which allowed pairs to breed successfully again. It also improved water quality in lakes and rivers. Across the United States, the birds and their nesting sites were protected and bald eagles were reintroduced into areas where they were previously lost.

In June 2007, after 40 years of action, there were approximately 10,000 breeding pairs and the species was removed from the endangered species list. National American Eagle Day not only allows us to celebrate what the eagle symbolises but also the great accomplishment of those involved in the recovery of such a majestic bird.