Killer whales or orcas are highly intelligent and curious marine mammals. Despite their name, there have been no recorded human fatalities caused by killer whales in the wild. 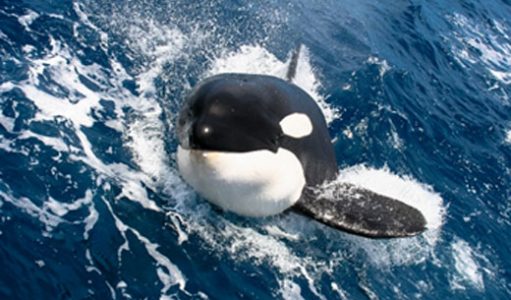 Amazing Facts About the Killer Whale

Killer whales are some of the most well-known marine mammals. This is partly because of their striking black and white colouration but also because of their presence in marine parks where they are made to perform and do tricks. They are actually highly intelligent marine mammals that live in strong family groups and can coordinate with each other to hunt for prey – they are not suited to live in captivity.

Whales, dolphins and porpoises are known collectively as cetaceans; there are 89 species in total. They spend their life at sea but have to come to the surface to breathe. Fourteen of these species are known as baleen whales or mysticetes. These are large whales that lack teeth and instead filter small animals from the ocean using baleen – plates made from the same protein as our fingernails (keratin) that act just like a sieve. The remaining 75 species are known as toothed whales or odontocetes, and as the name suggests they all have teeth.

Yes! Despite their name, killer whales are odontocetes and part of the dolphin family – Delphinidae.

Reaching up to 32 ft (10 m) in length, killer whales are the largest of the dolphins. Their distinctive black and white colouring makes them easy to distinguish from other dolphins, as does the impressive dorsal fin, which, in males, can reach 3–6 ft (1–1.8 m).

Where do killer whales live?

Killer whales are some of the widest ranging cetaceans (whales and dolphins), found in all oceans throughout the world. However, a single individual won’t travel the globe as they form local communities and one community won’t mingle with another. In fact, whilst they are the same species, killer whales in one area look and sound different to those in another and they even feast on different food.

What do killer whales eat?

As apex predators, killer whales are at the top of the food chain. They have a varied diet consisting of marine mammals, fish, sharks and rays, and cephalopods (e.g. squids). But, not all killer whales have the same taste; some like fish and some like mammals and they don’t switch between the two. Hunting strategies and vocalisations vary depending on prey choice, but the one thing they all have in common is that none prey on humans.

Killer whales are extremely sociable and live in tight family groups known as matriarchal pods, which are led by females. Bonds are strong, particularly between mothers and calves so separation is very stressful for killer whales. They are continually interacting with each other and are able to coordinate, which is particularly impressive when hunting as all individuals work together to locate and catch prey.

How do killer whales communicate?

Like all marine mammals, killer whales communicate, navigate and explore their home using sound. They produce a variety of sounds including echolocation clicks, whistles and pulsed sounds.

Echolocation is used by killer whales to investigate things in their environment, such as other killer whales, prey or obstacles in their way. Clicks emitted through a fatty organ in the forehead known as a melon, hit and bounce back from objects in the environment. Echoes are received through the lower jaw and provide information about the object including what it is, how big it is and how far away it is.

Do killer whales have dialects?

Whistles and pulsed sounds are used for communication and during social interactions. Different groups of killer whales have their own repertoire of social sounds which are passed on through generations. These calls act as an identifier and enable individuals to work out who is part of their pod and who isn’t and helps them to stay together.

Are killer whales a threat to humans?

Humans are not the natural prey of killer whales and there have been no recorded attacks on humans in the wild. However, killer whales have harmed and sometimes killed trainers in marine parks. Killer whales are highly intelligent and sociable animals that travel long distances and form strong family bonds – captive environments do not fulfil their needs and are stressful. The tanks are small, the diet is unnatural and the environment is unstimulating. Also, like humans, not all killer whales get on. Moving killer whales between facilities and forcing different individuals to live together in a confined space is distressing and can result in aggression and physical and mental health issues.