Tigers are the largest members of the cat family and are renowned for their power and strength. 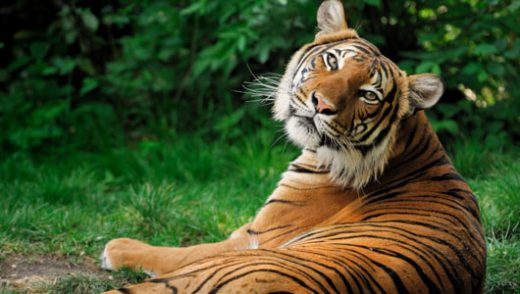 Amazing Facts About the Tiger

As the largest member of the cat family, tigers are strong, powerful and one of nature’s most feared predators. Their beautiful orange and black striped coats provide camouflage when hunting prey at night when they can reach speeds of 65 km/hr (~40 mph).

How many sub-species of tiger are there?

There are six living and three extinct tiger sub-species. Extant (living) species include the:

And extinct species include the:

Where do tigers live?

Tigers are native to Asia, but their range today is much smaller than it used to be, and includes South-east Asia, India, western China, and some parts of Russia, with breeding populations present in Bhutan, Bangladesh, India, Malaysia, Indonesia, Thailand, Russia and Nepal.

In terms of habitat, tigers inhabit a range of environments, but generally prefer areas with dense cover, like forests, with access to water and plenty of prey. Dens are positioned in secluded areas such as in caves, among dense vegetation or in hollow trees.

What do tigers eat?

Tigers are powerful apex predators that are at the top of the food chain and capable of killing animals over twice their size.  They are nocturnal hunters and will travel many miles to prey on a variety of animals including deer, buffalo and wild boar; native ungulates are the favourite. Not wanting to waste food, remains of large kills may be dragged to a thicket and loosely buried with leaves, ready to be returned to later.

Tigers are solitary, living alone in scent-marked territories that vary in size depending on the availability of prey. If there is plenty of prey available, the area can support more tigers, so territories will be smaller and tiger numbers higher.

Do tigers mate for life?

Female tigers reach sexual maturity at around 3–4 years of age, whilst males mature later at around 4–5. There is no particular breeding season, with female tigers entering oestrus, and therefore able to conceive, every 3–9 weeks. However, tigers usually breed in the cooler months from November to April. Females attract males and let them know they are ready to reproduce by vocalising and marking their territory with distinct smelling urine.

Litters of two to six cubs are born around 16 weeks after copulation. Male tigers have nothing to do with the female or the young. Cubs remain with their mothers for two to three years, after which they disperse to find their own territory. Hunting lessons begin when cubs are around six months old, with them becoming competent hunters at around 11 months and fully independent at around 18 months.

Why do tigers have stripes?

Large predators need to be able to sneak up on their prey, and the tigers distinctive coat acts as camouflage, hiding them as they stalk prey in dense vegetation. No two tigers have the same stripes, enabling individuals to be identified by their unique pattern of stripes.

Unlike other cats, tigers are good swimmers and often cool off in lakes and streams during the heat of the day.

Why are tigers endangered?

Three sub-species of tiger are already extinct and one species, the South China tiger, is thought only to survive in captivity. Tigers are endangered, and some the biggest threats to their survival include illegal poaching, loss of habitat due to agriculture and urbanisation, and reduction in prey availability. Increased interactions between tigers and humans and tiger attacks also results in tigers being killed.