Sumatran Tigers are not only the smallest tiger species, but also the last species to survive in Indonesia! 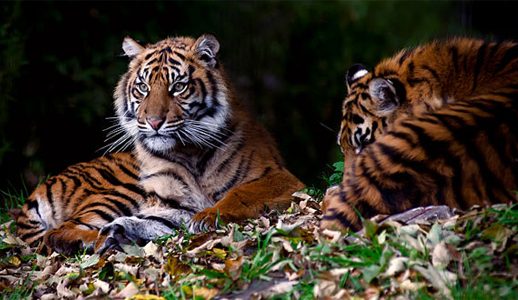 Amazing Facts About the Sumatran Tiger

Where do Sumatran Tigers live?

As the name suggests, the Sumatran Tiger inhabits the western Indonesian island of Sumatra. The majority of the remaining population of between 400-500 tigers prowl Sumatra’s Gunung Leuser National Park where they roam between low level forests and higher mountain forests. They are a very versatile species and have been found in forest, grasslands and wetlands.

How did they survive on an island?

Despite their similar appearance, scientists have deemed these tigers to have evolved differently from other tigers because of their isolation on the island when rising sea levels created the islands and exposed the Sumatran Tiger to a completely unique habitat.

When and what do Sumatran Tigers eat?

These majestic creatures will hunt when night falls. Like other tigers, their feasts will include deer, wild boar and cattle, but also monkeys, birds and sometimes even a slippery fish. As they are of smaller size, the Sumatran Tiger often eats smaller meals than the bigger tigers.

Sumatran Tigers are mainly solitary, and are known to become very protective over their territories. Clawing and scent-marking trees is just one of the ways in which they warn rivals away. The female Sumatran Tigers are less  protective and only use their territory for hunting purposes, allowing other females to roam freely.
Females breed year-round, with a gestation period of 103 days producing 2-6 cubs on average. The Sumatran Tiger cubs are fed milk for the first 8 weeks of their life, and then slowly introduced to meat until they reach 6 months of age and are ready to learn hunting skills!

What are the threats that face Sumatran Tigers?

Sumatran Tigers didn’t always have to walk 18 miles to find food. Due to the rapid rate of deforestation, which destroys their habitat and reduces the availability of prey, the hunt of a Sumatran Tiger has become a lengthy one.
As areas of forest are encroached or destroyed, humans and tigers cross paths more frequently which leads to conflict and exposure to poachers. Population declines are driven by the increasing palm oil trade, whereby plantations have resulted in 50% of the Sumatran forest being cut down since the 90’s. In traditional medicine, tiger bones and body parts are very valuable, as if their fur in the fashion and interior trade.
Hunting tigers is illegal in Indonesia and it is punishable by jail and fines if caught. Sadly, however, the poaching continues as demands for tiger parts, particularly in Asia, remains strong.

What can we do to help the Sumatran Tiger?

Many organisations are aware of the detrimental effects caused by the use of palm oil in everyday products (such as food and soap), and businesses are beginning to use sustainable palm oil or alternatives. If you want to make a difference, it really is worth checking out how sustainable your weekly shopping is, and what you can do to reduce consumption.
You can also support many campaigns against the illegal tiger trade and prey-base depletion. In 1975 the Convention on International Trade in Endangered Species (CITES) banned the trade in all tiger parts, however poaching still occurs to this day. For more information on how the global community addressed the tiger trade take a look at this Born Free campaign.