Hyenas are famous for their scavenging abilities, but the Spotted Hyena is in fact a strong hunter too. Also known as the “laughing hyena”, Spotted Hyenas hold a bite so powerful that it can crush a giraffe’s bones! 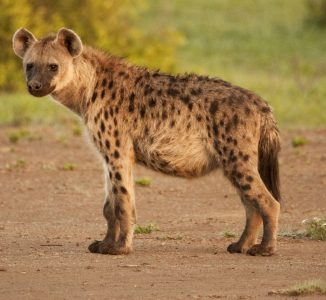 Amazing Facts About the Spotted Hyena

The Spotted Hyena is the largest of the hyena family which also includes the brown hyena, the striped hyena, and the aardwolf. They have an unusual appearance due to their long powerful neck, uneven leg length (front legs are longer), and short thick yellow-grey fur which is covered in a spot pattern. A short mane of hair stands upright on the Spotted Hyenas back, creating a “Mohican” hairstyle for the hunter!

Do Spotted Hyenas have the same spots?

No! Every Spotted Hyena has a different set of spots, and this variety of patterns allows individuals to be recognised easily.

Where do Spotted Hyenas live?

Spotted Hyenas can be found in a range of habitats within Sub-Saharan Africa. From semi-desert and savannah to woodlands and mountains, these strong mammals can survive as high up as 4100m! Currently, the largest populations lie within the Serengeti (Tanzania and Kenya) and the Kruger National Park (South Africa).

How do Spotted Hyenas keep cool?

Unlike other mammals, the Spotted Hyena does not use a den for resting. Instead, they make use of shaded holes and pools during the day, and splash around in water holes to cool down!

What do Spotted Hyenas eat?

As a predator, the Spotted Hyena eats the most meat out of all the hyena species. An average meal for these patterned creatures can include up to 14.5kg of meat! Typical prey consists of wildebeest, zebra and various antelope species, although if living near livestock they are known to steal a sheep or two! When scavenging, Spotted Hyenas can eat larger animals such as giraffes and elephants, and can even fully digest their bones.

What if they can’t find their typical prey?

Spotted Hyenas have been found to hunt and catch fish, tortoises and pythons in order to survive! It seems this intelligent species can escape hunger in many ways. Evolution has also allowed the Spotted Hyena to be very efficient in its water use, which is perfect for desert-living individuals!

Do Spotted Hyenas have any rivals?

The main rival for the Spotted Hyena is the lion as they live in similar habitats with similar prey choice. Often the Spotted Hyena can do all the hard work that leads up to a kill, only to be approached by a hungry group of lions who steal it away! Fights can break out in this situation, so Spotted Hyenas need to be always alert. If working in a group, they are capable of scaring the lions away.

Spotted Hyenas can also compete with one another during a feed, speeding up to see who can finish first!

Yes! Groups of hyenas are known as clans. Clans can include up to 100 members. Unlike many other species, females are larger than males and take charge of the clan!

Communication is through fascinating vocalisations, including their signature giggle. Spotted Hyenas tend to laugh when they are feeling excited or nervous, and make a whooping noise to call for their young or warn off predators. Within the clan, Spotted Hyenas say hello by squealing and groaning.

What happens when they have young?

Spotted Hyenas usually give birth to young within den areas and upgrade them to a “kindergarten” area shortly after. This allows them to meet other cubs and compete for dominance, without the helping hand of their mother. One their status has been proven, Spotted Hyenas teach their cubs how to hunt and protect themselves!

What is the biggest threat to the Spotted Hyena?

The population of Spotted Hyenas is estimated to be between 27-47,000, and they are known to be of Least Concern status on the IUCN Red List. However, this number is decreasing as a result of poor public perception that is leading to persecution.

When living in an unprotected area, the Spotted Hyena is targeted by hunting, trapping, and poisoning. This is because of concern that they can kill livestock, although the actual level of predation is thought to be low. Drought and deforestation may also be affecting the Spotted Hyena by reducing available habitat and altering the food chain.

What can be done to help?

Increasing the extent of protected areas within the hyena range and improving the level of protection and enforcement will be key to sustaining a healthy population of hyenas in the long-term. Equally important, however, is working with local people within to address their negative perceptions and to resolve any conflicts that may arise. The IUCN published a “Hyena Status Survey and Conservation Action Plan” back in 1998 that sought to address persecution and to promote livestock protection plans for worried farmers. Various anti-predation farming methods have been trialled since its launch, and visiting tourists are also now engaged with Spotted Hyena conservation.

Fun facts about the Spotted Hyena!