Slithering around for hundreds of millions of years, snakes are so old that they existed when dinosaurs roamed the Earth! 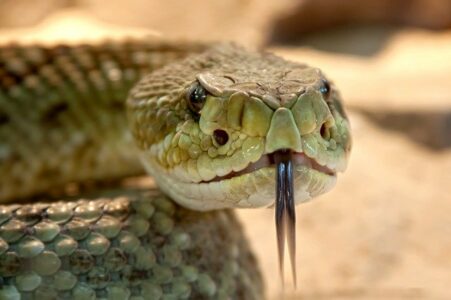 Image by Foto-Rabe from Pixabay.

Amazing Facts About the Snakes

Snakes, whether you love them or fear them they are fascinating. They live without limbs, survive in a wide range of habitats throughout the world and come in all colours and sizes. The smallest, the Barbados thread snake, is just 10cm long!

How many species of snake are there?

Did you know there are over 3,000 species of snake? You can find them in most places on earth, except Antarctica, Iceland, Ireland, Greenland and New Zealand. They are not all venomous, though. Most are harmless. Only around 600 species are venomous and, far fewer can hurt humans.

Can snakes regulate their body temperature?

Snakes, like other reptiles, are cold-blooded. This means that their body temperature changes according to their environment, unlike warm-blooded animals, like us. Our temperature remains constant regardless of the weather outside. To survive, snakes living in colder climates hibernate in winter and come out in summer when they can use the suns heat to keep warm.

Why do snakes shed their skin?

Have you ever seen something snake-like on the ground only to discover it is just a skin? Unlike most animals, a snake’s skin doesn’t grow along with them. Therefore, to grow, they shed their skin and produce more. A process that also helps to keep them healthy. It is really very impressive. The number of times they shed varies with species, though they will usually shed a couple of times a year. Faster growing species and young snakes shed more than others.

While around 70% of snake species are oviparous, meaning they lay eggs, there are in fact three methods of giving birth. Viviparous snakes give birth to live young, while ovoviviparous snakes grow their young in eggs that remain in the body of the female. Young are born live and the female keeps the egg inside of her.

How do snakes capture their prey?

Snakes use a range of senses to find prey. Their sense of smell is particularly important, though they don’t use their noses! Instead, they smell using their forked tongues. As they flick them in and out of their mouth, they collect chemical particles from the air and then transfer them to a special organ on the roof of their mouths, known as the Jacobson’s organ, which determines the scent. Snakes can also detect heat from prey animals and sense vibrations.

Most snakes like to sit and wait for prey to come along. Only a few species actively hunt for their dinner. Once they find their prey, some inject venom while others use constriction to squeeze their prey to death.

Because snakes have a slow metabolism, they don’t have to eat as often as other animals, but when they do eat, they eat big! They can open their jaws far wider than we can, and eat prey much bigger than themselves. They can’t bite their food though, so swallow it whole and use inward-facing teeth to hold prey in place while slowly edging it further and further into their mouth. They can do this because their lower jaw bone, or mandible, is not fused together like ours but loosely connected by ligaments. They can move the two sides separately, so always maintain a firm grip on their prey.

Once they have swallowed their prey, it can take days to weeks to fully digest it – can you imagine that?

Do I need to fear snakes?

While it is true that some species of snake are venomous and capable of killing humans, the majority are harmless. Furthermore, snakes are unlikely to intentionally attack humans. We are scary to them. If left well alone, they will more than likely choose to avoid us. It is when we pose a threat, that they attack – venom is a survival mechanism.

If you are in a snakes habitat, though, it’s always worth making yourself aware of the species you may see and, in particular, knowing which ones pose the most risk to humans. Be sensible, have an idea of what to do should you come in contact with a snake and, most importantly, show respect and give them space. It’s their home too, and they deserve to live without being poked, prodded and picked up by us!