In the wild, rabbits have plenty to keep them occupied, from foraging to reproduction to territorial defence. Captive rabbits, on the other hand, often lack stimulation, which can lead to behavioural problems and poor health. 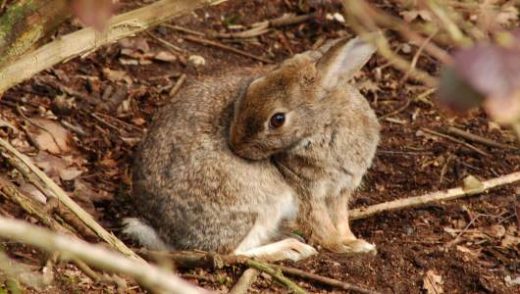 Amazing Facts About the European Rabbit

Rabbits live in the wild but also make great pets. European rabbits are burrowers and live in underground tunnel networks called warrens. Their whiskers are the same width as their body and are used to determine whether they will fit through a hole, which stops them from getting stuck in tunnels.

When pet rabbits are happy they may jump in the air turning and twisting their bodies, a behaviour known as a binky.

Where do wild rabbits live?

Wild rabbits live in areas where they can dig burrows. They are found in a variety of habitats including meadows, woods, forests, grasslands, deserts, and wetlands. They are native to southwest Europe and northwest Africa but have also been introduced in other locations as well.

Where do rabbits sleep?

In the wild, rabbits live in warrens comprising an intricate series of underground tunnels or burrows with multiple entrances.

Rabbits are sociable animals that live with other individuals in warrens. They are hierarchical, so one female rabbit is dominant; males will also form a hierarchy. The dominant rabbit enjoys many benefits. They get the best burrows, first dibs on food and can request grooming from other rabbits.

How high can a rabbit jump?

Rabbits have extremely strong hind limbs which allow them to leap great distances. How high they can jump is debated, but they can jump over 2 ft (0.6 m) high, and possibly up to 4 ft (1.2 m). Rabbits can leap up to 9 ft (2.7 m) horizontally.

How do wild rabbits detect predators?

Rabbits are prey animals. When out of the burrow, they are constantly on the lookout for predators, such as foxes. Once they detect a danger they can signal to others by thumping their hind legs, before seeking the shelter of the burrow. Spotting predators quickly gives them the best chance of getting back before being caught. Therefore, they have good hearing, and sight, and an excellent sense of smell.

They have nearly 360° panoramic vision, allowing them to detect predators from all directions; they can see everything behind them and only have a small blind-spot in front of their nose. Their eyesight is geared towards detecting movement at great distances, however, so their up-close vision is limited. Whilst their vision is good, their sense of smell is better, and they will likely be able to smell a predator before they see them.

Rabbits hear in a similar range to humans, but they can detect higher frequency sounds than we can. Their hearing is highly developed, and they can detect sounds from far away. Rabbit ears can move independently of each other, a feature which is used by rabbits to help work out where a sound is coming from.

European rabbits have been domesticated since the Middle ages. Captive rabbits are kept for pets, but also for food, fur, wool, and research.

In the UK, rabbits are popular, with around 1.2 million thought to be kept as pets. They are a big commitment, however, and many factors need to be considered before taking on the responsibility.

How much space do my rabbits need?

The answer is as much as you can possibly give them. Rabbits are active animals that need space to be able to run, jump, and dig. They need to be able to stand up fully on their hind legs and stretch out fully when lying down.

Rabbits are prey animals and will feel exposed and threatened without protection, so they require shelter and plenty of hiding places.

Does my rabbit need company?

In the wild, rabbits are social animals – a trait that has stayed with them during the domestication process. Companionship is important to their welfare. A lone rabbit will likely get lonely and bored, so they should be kept in pairs or groups.

What should I feed my rabbits?

Rabbits need an appropriate diet to remain healthy. Fibre, in the form of hay and grass, is the most vital food for rabbits – it’s essential for their digestive health, and should be supplied always. Rabbit pellets should also be fed daily, and diet should be supplemented with vegetables and some fruits.

How do I stop my rabbits getting bored?

In the wild, rabbits have plenty to keep them occupied, from foraging, and reproduction to territorial defence. Captive rabbits, on the other hand, often lack stimulation, which can lead to behavioural problems and poor health.

Much like humans, they need to be kept physically and mentally active. A rabbit’s natural environment can be imitated by providing enrichment such as tunnels and platforms for climbing, tree stumps, twigs, suitable toys, and places to hide such as cardboard boxes.

Digging is an innate and favourite pastime of rabbits, both wild and domesticated. By providing digging substitutes, such as a sand or earth pit, your rabbit will be able to dig away without damaging your garden or escaping.

Just like humans, rabbits become bored if their environments remain the same, so they will benefit from variety and the occasional change of scenery. However, too much change can have adverse effects. A wild rabbit’s survival depends on an intimate knowledge of its surroundings in order to escape from predators. Structural changes to the “warren” of a rabbit kept as a pet should be kept subtle, such as changing their toys and regularly providing new ones.