The peregrine falcon is the fastest animal on the planet. In a ‘stoop’ they can reach up to speeds of 321 kph! 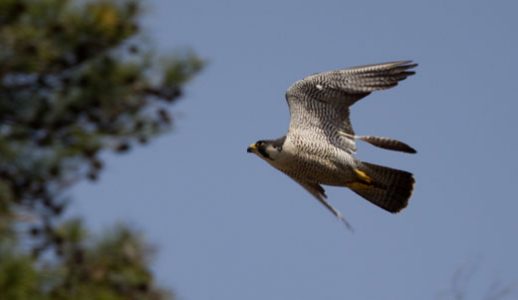 Amazing Facts About the Peregrine Falcon

Peregrine falcons are the fastest creatures on the planet, reaching speeds of over 321 kph (200 mph) as they dive to catch their prey. They are also one of the most adaptable and can thrive in urban areas surrounded by humans. However, peregrine falcons have a history of persecution, which has pushed them to the very edge of extinction before now though they are currently listed as least concern on the IUCN Red List of Threatened Species. 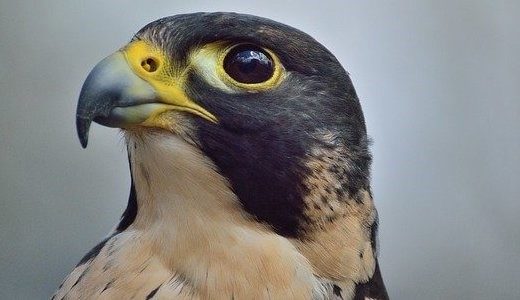 Peregrine falcons are one of the largest and most powerful species of falcon. They have long, bluntly pointed wings and a relatively short tail, with dark blue wings and head. Their pale breast is spotted, and the undersides of their wings are barred with dark stripes. The crown of the head is dark, and they have a black ‘moustache’ which gives them a hooded expression.

Juvenile peregrines look slightly different to the adults with dark brown plumage, streaks on the underside of their body and pale tips to their feathers.

Where do peregrine falcons live?

During the breeding season, they make their nests on crags and rock faces including sea cliffs, quarries and, increasingly, buildings in urban areas. Tower blocks, bridges and cathedrals offer the perfect urban alternative to high cliffs, while feral pigeons and starlings provide a reliable source of food.

British and Irish peregrine falcons are present all year round, though females and juvenile may move away from upland areas during the autumn. More northerly populations are migratory. Some European peregrines spend the winter in Africa while some Arctic birds travel to South America. These birds can fly as many as 15,500 miles every year!

Away from the nest, peregrine falcons are usually solitary and may travel widely. The name ‘peregrine’ actually means ‘wanderer’ or ‘pilgrim’.

What do peregrine falcons eat?

Peregrine falcons mostly feed on birds they have captured in flight including species such as feral pigeons, woodpigeons, blackbirds, starlings and black-headed gulls. They will occasionally also catch mammals such as rabbits and, in times of extreme weather conditions, carrion.

They hunt either by chasing their prey or by diving on it from a great height in a movement called a ‘stoop’. Due to their speed, peregrine falcons aim not to catch their prey but to stun it with a blow before grabbing it as it falls – a hunting peregrine falcon is travelling so fast that a direct strike could injure it! If the prey is too heavy to carry, they will let it fall to the ground and eat it there. Peregrine falcons hunt mainly at dawn and dusk.

How are peregrine falcons adapted for hunting?

Peregrine falcons have many adaptations for hunting.

Their nostrils, for example, guide shock waves of air to stop the high pressure damaging their lungs while they dive. A natural design so fascinating, it inspired the design of the first jet engines!

They have excellent binocular vision, eight times better than that of a human. They can see prey from more than 3 km away. They have a third eyelid, which spreads tears and clears debris away to protect their eyes without obstructing their vision during a stoop.

Peregrines can see most clearly with their head turned at an angle, which is why peregrine falcons usually fly towards their prey in a curve – this also helps them fly faster, as it reduces drag.

When do peregrine falcons breed?

Peregrine falcon pairs mate for life and return to their nest in February, where they perform incredible aerobatic displays. The male starts by suppling the female with food, often dropping it for her to catch mid-flight, sometimes while shes flying upside down!

The female forms a scrape with her chest and legs in which to lay her eggs; she doesn’t use any other materials. She then lays 3-4 eggs in March or April and incubates them for around 30 days, while the male provides her with food.

Young falcons rely on their parents for food initially before fledging after around 39 days and becoming fully independent.

What are the threats to peregrine falcons?

In the first half of the twentieth century, peregrine falcons were heavily persecuted by gamekeepers and landowners, who were concerned about their stocks of game-birds. Now, peregrine falcons born on a managed grouse moor are still less likely to successfully raise young than one in a similar, unmanaged habitat. During the Second World War, thousands of peregrine falcons were also killed to protect the messenger pigeons carrying important military messages. Their numbers began to recover, and new legislation in 1955 outlawed their killing.

However, soon after this law was introduced, numbers of peregrine falcons and many other birds of prey suddenly began to plummet. Scientists eventually discovered that the culprit was agricultural pesticides including organochloride chemicals such as DDT. Prey species eat the pesticides along with their food and pass them onto peregrine falcons and other predators when they get eaten themselves. DDT causes the shells of peregrine eggs to become so thin that they brake during incubation so few babies survive.

DDT was first banned in Hungary in 1968 with many countries following their lead. The US banned it in 1972 but it took the UK until 1984 to ban it. Thanks largely to the ban but also to efforts by conservation groups, we now have between 14,900-28,800 pairs in Europe, which makes up about 13% of the global population.

How can you help peregrine falcons?

There are many ways that we can help peregrine falcons.