The Adélie Penguin lives along the coastline and the small islands of the Antarctic continent. It breeds in rocky, ice-free coastal areas. When the sea freezes in the winter, they travel north and forage in the open ocean. Warming of the air and ocean is causing a decline in the West Antarctic Peninsula colonies. 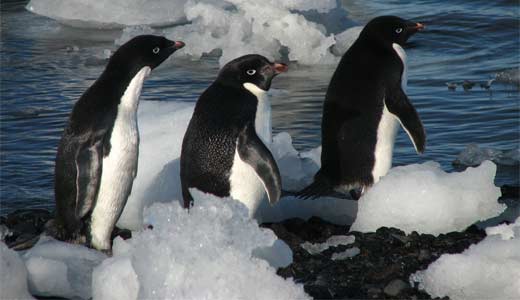 Amazing Facts About the Adélie Penguin

Adélie penguins are the smallest and most widespread penguin in the Antarctic. They are fantastic foragers, feasting mainly on krill, and feisty little creatures known for stealing pebbles from their neighbour’s nest!

Where did the Adélie penguin get its name?

Adélie penguins are named after Adéle d’Urville, the wife of the French Antarctic explorer Dumont d’Urville. 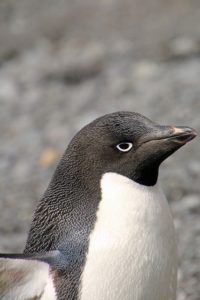 Adélie penguins have the characteristic black and white plumage familiar to all penguins, but the distinguishing feature is the white ring around the eye and red bill. They have a thick layer of fat to keep them warm in cold climates, and feathers provide a waterproof coating. The feet are strong and webbed with nails that assist with climbing and sliding; they are pink in colour.

Why are penguins black and white?

Where do Adélie penguins live?

Adélie penguins inhabit coastlines of the Antarctic on or near sea-ice. They head north to the sea ice during colder winter months to take advantage of the plentiful food source, and south during summer, where they congregate on ice-free beaches or rocks to breed.

They are one of only two penguin species on the Antarctic mainland, the other species being the Emperor penguin which is much larger.

What do Adélie penguins eat?

Adélie penguins are carnivores that get 100% of their food from the sea.

They are excellent swimmers and can dive to depths of up to 574 ft (175 m) in search of prey. They forage for crustaceans, fish and squid in the Southern Ocean, with krill making up a large part of their diet.

Do Adélie penguins have teeth?

Adélie penguins do not have teeth, but instead, have tooth-shaped barbs on their tongue and roof of their mouth that assist in swallowing prey.

How much food can Adélie penguins eat in a day?

Adélie penguins are efficient hunters and can eat up to 4.5 lb (2 kg) of food in one day.

No! Adélie penguins do not drink water, they eat snow! They also have a special gland in their nose that removes salt from the seawater they consume when swallowing their fish prey.

Do Adélie penguins mate for life?

Penguins mate for life. During the breeding season, the males arrive at the coastal breeding grounds first and begin building nests out of pebbles. The females arrive a few days later, and after courtship, the male and female pair complete their nest together. Sometimes, adults steal rocks from other nests instead of finding their own construction materials.

Females lay two eggs a couple of days apart and both parents take turns incubating them for around 35 days. While one is incubating the egg, the other goes on feeding trips for up to 10 days at a time.

One hatched, the fluffy, clumsy chicks are very vulnerable to predation by giant petrels and skuas. At the age of three weeks, they start to rely on safety in numbers and gather in small groups called crèches to protect themselves from predators and harsh weather, which allows both parents to resume foraging at the same time.

Young Adélie penguins can fend for themselves at around 2–3 months old.

Adélie penguins are highly social animals that congregate in large groups known as colonies. One of the largest penguin colonies is on Ross Island, where more than half a million Adélie penguins aggregate.

What are the main threats to Adélie penguins?

Adélie penguins are one of the most wide-spread Antarctic species, and population numbers are stable or increasing across much of their range. They are classified as least concern on The IUCN Red List of Threatened Species.

In terms of threats, Adélie penguins have no land-based predators, but in the water, they are at risk of predation from leopard seals and killer whales. Competition with commercial fisheries for fish and krill may also be a threat, especially as human population pressure continues to grow.

Are Adélie penguins at risk from climate change?

Adélie penguins rely on sea ice, so any loss because of climate change has the potential to affect populations. Climate change does not appear to be impacting all Adélie penguin colonies, though the West Antarctic Peninsula colonies are declining.