With their stunning white winter coats, Mountain Hares are a sight not to be missed. Unlike brown hares and rabbits, they are native to the UK and while usually solitary may be seen feeding in large groups in boreal forests and on mountain grasslands and moorlands. 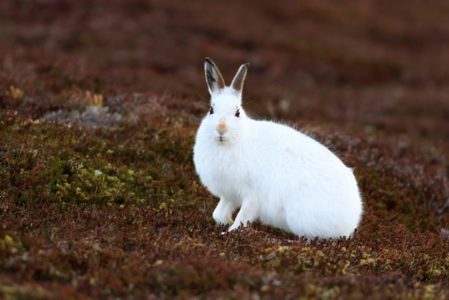 Amazing Facts About the Mountain hare 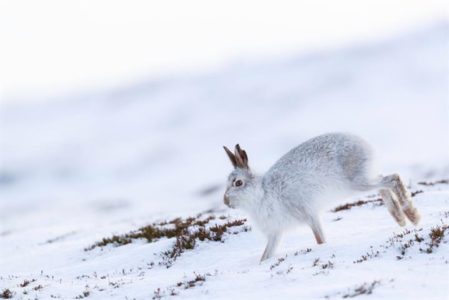 The mountain hare is smaller in size than the brown hare, and with shorter ears, between 2–3 in (60–80 mm). Colour varies with the season. In winter, mountain hares are a mix of white and blue/grey, with black tips on the ears. But, in summer, they are brown/grey. Their white winter colour keeps them camouflaged against the snow.

Where do mountain hares live?

Mountain hares are found in many locations including Poland, China, Russia and the UK. They are widespread in the Palearctic region between Scandinavia and Poland to the Pacific coast of Russia. There are isolated populations in Ireland, Scotland, the Alps and Japan. Populations of mountain hare have been introduced in northern England and on some Scottish islands including Orkney and Skye.

What do mountain hares eat?

Their diet varies by both habitat and season. During the summer months, the hares that live in the forest feed on leaves and twigs. Those that live in the tundra eat alpine plants. They have also been known to eat grasses and lichen. However, during the winter months, their diet changes as much of their food is buried underneath a thick blanket of snow. Mountain hares mostly eat heather during winter.

Yes! Mountain Hares are nocturnal. They rest during the day and come out at night to feed.

How are Mountain Hares adapted to their environment? 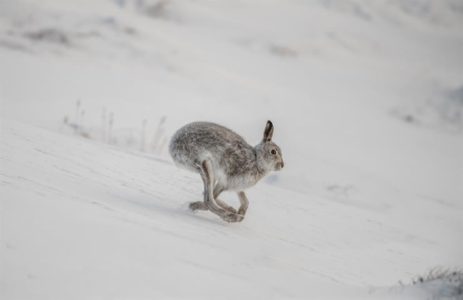 Mountain Hares are well adapted to their cold, snowy environments. They moult twice a year, changing coat colour to blend into the environment around them.

Their winter coat includes heavily furred back paws which act like snowshoes, spreading their weight over a larger surface area to stop them from sinking too far into the snow.

What are baby Mountain Hares called?

Mountain Hares mate from the end of January, and babies, known as leverets, are usually born between March and July after a 50 day gestation period. Females can have up to four litters of around 1–4 leverets each year. They are born with fur and with their eyes open.

What are the main threats to Mountain Hares?

Mountain Hares are listed as Least Concern on the IUCN Red List of Endangered Species. They are prey animals, so provide a rich food source for a variety of predators including golden eagles and wildcats.

The biggest threat to Mountain Hares is humans. They serve as game for hunters in some areas and are occasionally killed for sport. They are also sometimes shot, as mountain hares can destroy crops and fruit trees when little food is available in the winter months. Further threats to Mountain Hares include habitat loss and fragmentation.

In Scotland, mountain hares are widely persecuted as they are thought to carry a tick-borne virus that affects red grouse numbers.