The Amur Leopard is one of the rarest felines in the world. They are speedy creatures able to run up to 35 miles per hour, faster than Usain Bolt! 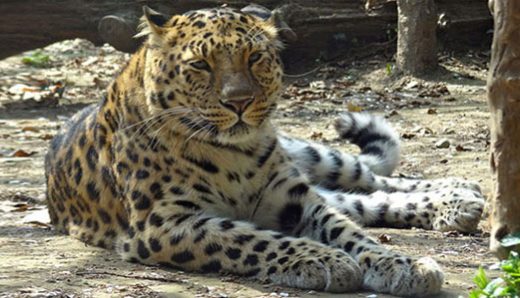 Amazing Facts About the Amur Leopard

Amur leopards have thick white or cream fur with large, widely spaced black spots called “rosettes” covering the head, back, tail and legs. Fur length varies from summer (0.7–0.9 in) to winter (2.8 in).

How long is an Amur leopards tail?

Amur leopards have long bushy tails of 32–35 in (81–89 cm). The long length comes in handy during cold winters as they can wrap them around themselves for warmth.

Where do Amur leopards live?

Amur leopards, also known as Far East leopards, Manchurian leopards or Korean leopards, are found in the Russian Far East. Their range is small and confined to forests of a temperate region crossed by the Amur River, a natural boundary between China and Russia. They are the only leopard subspecies adapted to survive in both extreme snowy winter and hot summer climates.

Where to Amur leopards rest?

Amur leopards are nocturnal so sleep during the day in cool caves or sheltered spots.

What do Amur leopards eat?

Amur leopards are carnivores. They are opportunistic so are not fussy eaters, but prey consists mainly of roe and sika deer, hares, wild pigs and badgers. Although, when feeling brave, they have been known to eat young black bears.

Food can be scarce, so if they have food left over, they may drag and hide the remains from other predators that might fancy a nibble.

How are Amur leopards adapted to eating meat?

Amur leopards have rough tongues covered in tiny hooks called denticles that are used to scrape meat off the bone of their prey.

Amur leopards are highly territorial and live alone, only coming together to mate.

How big is an Amur leopard’s territory?

Individual Amur leopards can have territories of 19–116 square miles, which is the size of 56,144 football fields.

How fast can Amur leopards run?

Like other leopards, Amur leopards are fast and nimble. They can run at speeds of up to 37 miles per hour and leap up to 19 ft (5.8 m) horizontally.

Who would win in a race between an Amur leopard and Usain Bolt?

In a race between Usain Bolt and an Amur leopard, there is no contest; Bolt would be left in the dust as he runs at up to 28 miles per hour.

How may cubs do Amur leopards have?

Female Amur leopards start reproducing at three to four years of age. A litter of between one and four cubs is born around 12 weeks after mating. Cubs are born with their eyes closed and only begin to open them seven or eight days after birth.

How long do Amur leopard cubs stay with their mothers?

Cubs stay with their mothers for up to two years before braving the wild alone.

What is the biggest threat to Amur leopards?

With less than 70 left in the wild, Amur leopards are on the brink of extinction.

The main threats are poaching for their fur, hunting of prey species and habitat loss due to farming development, growth of cities and human induced forest fires.

The small size of the population means inbreeding is also becoming a problem. Genetic diversity is low and as such individuals are at risk from abnormalities that can impact health, reproduction and survival.

Do Amur leopards have predators?

Amur leopards are predators, but prey choice overlaps with that of the tiger. A reduction in small prey availability, particularly in winter, puts Amur leopards at risk from tigers, who will prey on them to reduce competition for food.

What is being done to help Amur leopards?

There is still hope that Amur leopards can be saved from extinction. For example, effective conservation measures in a Russian National Park have resulted in the Amur leopard population almost doubling from 30 in 2007 to 57 in 2015.

The Amur Leopard and Tiger Alliance (ALTA) was set up by Russian and western conservation organisations to conserve both the Amur leopard and Amur tiger. Working across Northeast Asia, ALTA aims to co-ordinate conservation efforts of all relevant parties. Initiatives include presence of anti-poaching teams, monitoring and tracking of populations, monitoring of fires and research into firefighting techniques, production of plans that ensure land development considers Amur leopard habitats, and increasing awareness and education.