Female kangaroos can determine the sex of their offspring and even delay gestation when environmental factors are likely to diminish the chance of their young surviving. 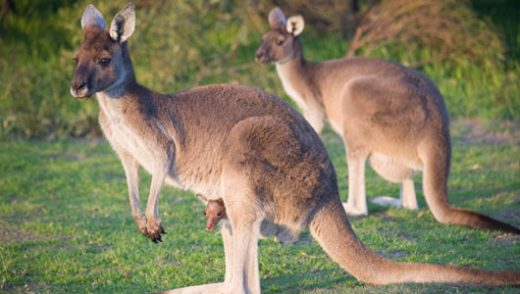 Amazing Facts About the Kangaroo

For many people, the Australian outback means only one thing – Kangaroos! These distinctive marsupials can leap 9 m in a single jump, keep their young warm in cosy pouches and live in groups known as mobs. Kangaroos and their relatives are the only animals that use hopping as their primary method of travel but they are unable to walk backwards! Want to know more? Keep reading for our fascinating facts!

Kangaroos have short, soft coats with powerful hind legs, small forelegs, tall ears, large feet and a long tail. The second and third claws on their hind limbs are fused together to create a special claw for grooming, while their forepaws are very dexterous and useful for eating, grooming and defence.

What family do Kangaroos belong to?

Kangaroos are marsupials, or pouched mammals. This group is divided into seven different orders, including opossums, bandicoots, koalas and wombats, all characterised by a limited gestation period. Kangaroos belong to the Macropodidae (‘large foot’) family, which has over 60 different species including Kangaroos, wallabies, tree Kangaroos and quokkas.

How many species of Kangaroo are there?

There are four main species of Kangaroo. Red Kangaroos are the largest species, and therefore the largest living marsupial; they may reach 1.8 m in height when standing and are powerfully built, with reddish brown coats in males and blue-grey coats in females. Red Kangaroos typically live in central Australia.

Antilopine Kangaroos are found in the tropical northern hills of Australia; they are slightly smaller and more slender than the Red Kangaroos and are extremely fast. They are also sexually dimorphic, which means that males and females look different – males have reddish coats while females are brown and grey. Males are also much larger than females.

Western Grey Kangaroos are found in Southern Australia and on Kangaroo Island in a variety of habitats including woodlands, coastal heathlands and urban areas. They are smaller than Red Kangaroos with brown coats and pale chests.

Eastern Grey Kangaroos inhabit Australia’s Eastern coastline and are the only Kangaroo species found in Tasmania. They live in areas of high rainfall, including some mountainous areas, – and look very similar to Western Grey kangaroos but with a paler face and a black tip to the tail.

Where do Kangaroos live?

Kangaroos generally live in small groups called ‘mobs’ with around 10 females and their joeys and one or two males. In areas with lots of food though, huge gatherings of around 1500 Kangaroos have been observed!

Kangaroos typically remain within a small home territory but have been known to travel great distances in times of poor environmental conditions.

What do Kangaroos eat?

Kangaroos are herbivores, with a strictly plant-based diet of grasses and flowering plants. They are able to survive without access to water in the dry outback for a considerable time, gaining what little moisture they need from eating succulent plants. Like many other herbivores, including cows, Kangaroos have a complex digestive system that allows them to regurgitate food which can then be broken down to remove more nutrients, a process known as ‘chewing the cud’.

Kangaroos are typically active at dawn and dusk (this is called being ‘crepuscular’) or at night, spending the majority of their time foraging for food.

How do Kangaroos communicate?

Communication varies with species and purpose. Male Kangaroos, for example, make a hissing sound and toss their heads before beginning to fight, which is possibly a way of warning other males!

Eastern Grey Kangaroos communicate with each other using a gentle clucking noise and will cough when alarmed or angry. Grey Kangaroos signal danger by stamping the ground with their powerful hind legs so that other members of the mob can both hear the warning sound and feel the vibrations of the motion.

Like other species of mammal, Kangaroos are also likely to use chemicals to communicate.

When do Kangaroos breed?

Kangaroos have a polygynous mating system where a male will mate with several different females but a female will usually only mate with a single male. Male Kangaroos (known as ‘boomers’) compete for access to females (‘flyers’) through intense boxing matches, where they will strike each other with their forepaws and lash out with their powerful hind legs. Most female Kangaroos can breed at any time of year, though the Eastern Grey species breeds seasonally in the spring and early summer.

A baby Kangaroo is called a joey – these are tiny when they are born (about 2.5 cm long and weighing just 0.75 g) and their first challenge is to crawl through their mother’s fur to her pouch, where they attach and feed.

Most Kangaroos, with the exception of Western Greys, are able to delay development of their eggs in a process known as diapause depending on environmental conditions and their current offspring. It’s not unusual for a female to have a joey in her pouch, a youngster living outside the pouch and a fertilised egg awaiting development! This means a female Kangaroo can raise three young every two years, despite the average length of time a joey will drink her milk being a year. The female Kangaroo almost exclusively provides parental care.

What are the threats to Kangaroos?

Larger species of Kangaroos are largely protected from predators by their huge size and powerful build – adult Kangaroos are able to defend themselves with savage kicks from the hind limbs, while joeys are safe within their mother’s pouch. Some young Kangaroos may be taken by foxes, dingos or, occasionally, birds of prey like the wedge-tailed eagle but by far the greatest predator of Kangaroos is humans.

In some areas, Kangaroos are considered a pest as they compete for grazing with livestock, particularly in areas where foraging is
limited, and may contribute to areas of erosion where the exposed soil is washed or blown away in bad weather. Some Kangaroos are also killed for their skins and their meat, which is exported as a source of high-quality game.

How can you help Kangaroos?

Kangaroos are not currently considered endangered as almost 3 million square miles of their habitat lies within the boundaries of Australia’s National Parks. All states regulate the hunting of Kangaroos. This distinctive species brings economic benefits to Australia through tourism, which is a great way to support the local wildlife when done sustainably. If you are lucky enough to visit Australia on holiday, make sure you do your research and look for companies that are committed to ethical and environmentally-friendly practices.

At the start of this year, the world watched in horror as bushfires swept across more than 10 million hectares of Australia, destroying both human and animal lives. Charities such as WWF are still taking donations that are used to provide emergency care for injured wildlife, including Kangaroos.

Kangaroo Island, the third largest island off the Australian coast, which is renowned as a sanctuary for local wildlife due to the absence of introduced species like rabbits and foxes, has also suffered huge losses. Many charities are using this disaster to spread the message about the dangers of climate change, which could lead to catastrophic bushfires becoming more frequent as the climate warms. Help them by spreading information about climate change and its effects on both humans and animals on social media or to friends and family, encouraging people to speak up to those in power about our demands for immediate, positive change.