Grizzly bears are striking creatures, extending up to 10 feet in height and weighing up to 1200 pounds. They are omnivores, consuming food as small as seeds and as large as deer. They are at their most voracious during the summer when they must gain weight to survive the winter. During winter, they descend into a deep sleep and can go without food or water for over 100 days. 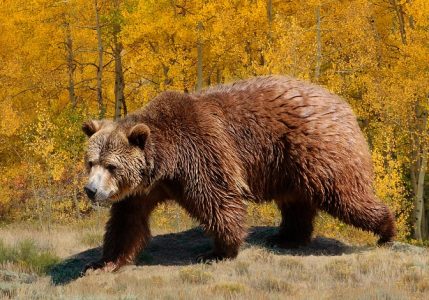 Amazing Facts About the Grizzly Bear

Grizzly Bears are a subspecies of brown bear, found roaming the wilderness of North America. They are often a dark brown colour but the long guard hairs on their backs have white tips, lending them a ‘grizzled’ appearance. They have powerful shoulder muscles which appear as a hump between their front shoulders. These muscles are used when they dig the earth in search of food and excavate the ground to form winter dens.

They are among the largest of the bears, with one famously recorded as weighing 1200 pounds and being 10 feet tall. They are still beaten in this regard by polar bears, however, with one found weighing over 2,200 pounds. Grizzlies are long-living animals, with an average life span of 25 years.

What is the difference between grizzly bears and brown bears?

During the winter, grizzly bears descend into a deep sleep called torpor and can go without food and water for over 100 days. However, there is some debate about whether grizzly bears are true hibernators. The body temperature and metabolic rate of bears doesn’t decrease to the same extent as hibernators such as squirrels during the winter. This means that bears can emerge more easily from their sleep if threatened by predators or to give birth to cubs. Like other animals that hibernate or go into torpor, bears don’t necessarily go entirely without food during the winter. They may emerge from torpor periodically to consume small quantities of food.

What is the diet of the grizzly bear?

As omnivores, grizzly bears eat a range of plants and animals. Components of their diet may include seeds, berries, roots, grasses, fungi, deer, elk, fish and insects. In preparation for winter torpor, grizzly bears increase their food intake during the summer in order to put on weight. This is especially important for females as they need sufficient fat reserves to give birth to and nurse cubs before leaving their winter den. In Alaska, an important event in grizzly bear survival is the summer migration of millions of salmon from the Pacific Ocean to the mountain streams of their origin. Feeding on these fish helps keep the bears alive during their winter sleep.

What is the social behaviour of the grizzly bear?

Grizzly bears, like polar bears and sun bears tend to be solitary apart from mothers and their young. However, at times they may be found in groups. For example, in Alaska during the summer salmon migration upstream, they can be seen congregating on rivers.

What is the habitat of the grizzly bear?

Grizzly bears once roamed much of the western North America and even parts of the Great Plains. Following European settlement, their range significantly decreased. At present, they are mainly found in Alaska and Canada with smaller populations found further south in states such as Montana, Wyoming and Idaho. Within this range, grizzly bears occur in a variety of habitats including forests, subalpine meadows, open plains and arctic tundra.

After having been eliminated from much of its range, grizzly bears were given legal protection under the Endangered Species Act in 1975. Although they still occupy just 2% of their former range, populations in Yellowstone have been removed from the endangered list as numbers have increased. As a result, hunting of grizzly bears is now permitted outside the boundary of Yellowstone National Park.

What are the main threats to grizzly bears?

Conflict with humans is one of the primary threats facing grizzly bear populations at present. Bears may enter human-occupied areas to look for food or habitat and be consequently deemed a threat and killed. Hunting of bears is also permitted in Canada, Alaska and now outside of Yellowstone National Park.

Another significant threat to bears is habitat loss as human development reduces and fragments their range. As a result, conservation strategies like creating land corridors to reconnect populations are becoming increasingly important.

Climate change also poses a growing threat to bear populations. This is because changing climatic conditions are having an impact on food availability. In Yellowstone National Park, for example, whitebark pine seeds are an important component of their diet. Shorter and milder winters have exacerbated beetle infestation and fungal disease on the plants, contributing to their decline. Some grizzly bears have been found to compensate by consuming other food items but it is still unclear whether they will be able to cope with these changes long term.

What do I do if I encounter a grizzly bear?

Firstly, grizzly bear attacks are rare and the chances of being injured by one are about 1 in 2.1 million according to the National Park Service. Encounters can be avoided by keeping bins bear-proof, not leaving food outside houses or on campsites and hiking in groups. If you do encounter a bear, the best thing to do is back away slowly as it is unlikely you will be able to outrun the bear. If the bear has made contact, it may be appropriate to play dead as injuries are more likely if you attempt to defend yourself.