The Black Bear is the most familiar and smallest of bears found in North America. Interestingly, despite their name, their coats can be coloured black, brown, cinnamon, blue-black, blue-grey and even white. As well as being agile climbers, they are also at home in the water and are efficient runners, reaching speeds of up to 30 miles an hour. 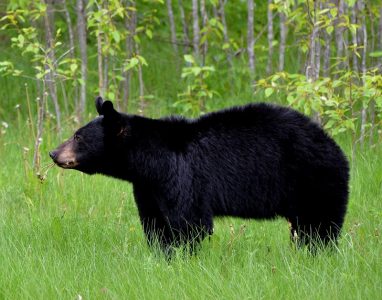 Amazing Facts About the Black Bear

The American Black Bear is the smallest and most common bear species on the North American continent. The other two species are the Brown Bear, including the Grizzly Bear and the Polar Bear. Their height can be up to 6 feet and weight up to 600 pounds. As their name suggests, they generally have a black coat and brown muzzle although some can be blue-black, blue-grey, brown and cinnamon. On rare occasions, their coat may even be white which is the case with 10% of the population of the Kermode subspecies found in British Columbia.

Black bears are superb climbers, with short curved claws that enable them to ascend trees. They are also competent swimmers, a skill that they use to hunt fish in rivers and lakes. They aren’t amateur runners either, capable of reaching speeds of 30 miles per hour.

How do I tell the difference between the American black bear and grizzly bear?

Although American black bears are generally smaller and of different colour than grizzly bears, it can sometimes be hard to tell the difference. Some black bears can be the same size as or larger than a grizzly bear. Moreover, in some cases, black bears may be a similar brown colour to grizzlies.

What does the American black bear eat?

American black bears are omnivorous, consuming a range of grasses, fruits, roots, nuts, mammals, fish, carrion and honey. They are opportunistic eaters, feeding on whatever is available at the time. Similar to grizzly bears, they enter a deep winter sleep so they must build up sufficient fat reserves during the summer. Consequently, fish are an important component of the summer diet of black bears with access to salmon streams.

What is the habitat of the American black bear?

The American black bear can be found across North America from Canada to Mexico in at least 40 states of the U.S. Due to loss of habitat and hunting, their range has been reduced to approximately 75% of their historical distribution. Their primary habitat is temperate and boreal forests but they may also be found in subtropical areas of Florida and Mexico. They are capable of living in vastly different conditions, ranging from the dry deserts of Mexico to the sub-arctic tundra.

American black bears construct dens to spend the winter and give birth in. To create these dens, the bears will often dig out a hollow in the earth or snow. Alternatively, dens can be made in caves, tree cavities, brush piles or root masses.

Do American black bears have any predators?

Apart from being hunted by humans, black bears have few predators. Cubs are most vulnerable to attack from predators such as mountain lions, wolves and other bears. However, once out of their winter sleep, black bear mothers are usually capable of defending their cubs from most predators.

What is the social behaviour of the American black bear?

Apart from mothers and their cubs, like grizzlies, black bears are generally solitary animals. However, they may be found in groups if food is particularly abundant in one area, for example, a berry patch of farm field. Where food is less abundant, black bears may defend a resource but they are not territorial. They don’t defend specific areas and may share their home range with other bears.

How does the American black bear give birth?

Breeding generally occurs from June to July every other year. Cubs are usually born in dens from January to February and weigh just ½ to ¾ pounds. They are weaned at around 6 months old and remain with their mother for 1 and ½ years in total. Mothers and cubs tend to separate in time for the next breeding season which helps avoid aggression from male bears.

If you live in an area with black bears, attacks can be avoided using a number of strategies.

Classed as Least Concern on the IUCN Red List of Threatened Species, most populations of American black bears are stable or increasing. Their range has contracted due to habitat destruction and hunting by humans. However, they have been fairy resilient due to their ability to adapt to using human food resources and withstand habitat loss. Nevertheless, some populations are more threatened than others and it remains to be seen how they will cope with future human encroachment into their habitat.