With their distinctive black and white bodies and brightly coloured beaks, puffins are well known and easily recognisable birds in the auk family. In summer, their broad, triangular beaks and legs are bright orange but in winter, following the end of the breeding season, they dull to a grey colour. 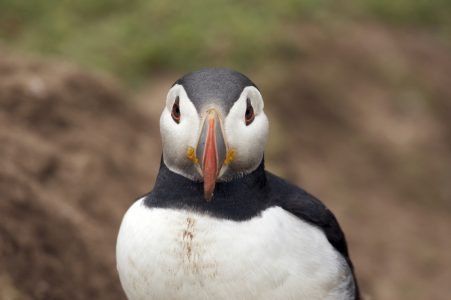 Amazing Facts About the Atlantic Puffin

With their distinctive black and white bodies and brightly coloured beaks, puffins are well known and easily recognisable birds in the auk family. With wings adapted to swimming and webbed feet for steering, puffins are well adapted for life at sea. They are both able to swallow fish under water or carry multiple fish back to their burrow in one go.

Atlantic puffins are very distinctive small black and white birds, with stocky bodies and short wings adapted for swimming; their wingspan is 19–25 in (28–30 cm). In summer, their broad, triangular beaks and legs are bright orange but in winter, following the end of the breeding season, they dull to a grey colour.

Where do Atlantic puffins live?

Atlantic puffins are found across the North-Atlantic Ocean, from the east coast of Canada and America to western Europe and Russia. They spend entire winters at sea without coming in to land, and rest by sitting on the surface of the water. In summer, between April and August, puffins come into breed on rocky cliffs and in burrows on grassy banks.

How are puffins adapted for a life at sea?

Spending all winter at sea requires some adaptations, and puffins survive by being excellent swimmers and hunters. They also have waterproof feathers and the ability to drink seawater.

What do puffins eat?

Puffins are pelagic seabirds that feed mainly on small fish such as sandeels, hake, herring, capelin and sand lance. The exact diet varies between colonies though, and depends on which fish are found around the breeding area.

Puffins dive 200 ft (60 m) in search of fish, with dives usually lasting 20–30 seconds, but up to a minute is possible. They are unusual in that they have coarse tongues and spines on their upper palette which enables them to carry multiple fish at a time, usually up to 10 sandeels in any one feeding trip. This means they can carry more food for their young and feed them without the need for regurgitation.

Puffins are monogamous, mating with the same partner year after year. They reach sexual maturity and start reproducing at around five years old and lay one egg per year.

Puffins nest in big colonies on coastal cliffs and islands, laying eggs in rock crevices or nests in grass banks. Burrows, which can be around 2–3 ft (0.6–1 m) long, are dug by using their sharp claws and beaks before being lined with a mix of soft feathers and grass. Once the female has laid her egg the male and female take it in turns to incubate it for around 36 to 45 days. Once fledged, baby puffins take to the ocean and remain there for two to three years before returning to land to nest.

What is a baby puffin called?

Yes, puffins can fly. Whilst their small wings are adapted for swimming, they are good at flying and will beat their wings rapidly up to 400 times a minute and reach speeds of 88.5 km/h (55 mph).

Atlantic puffins are listed as vulnerable on the IUCN red list of endangered species. Population numbers are declining and puffins are now absent from many areas they used to inhabit. The main threats include pollution from oil spills, predator introduction, hunting, over fishing and uncontrolled tourism, which can disturb breeding puffins and interfere with daily activities such as feeding young.