Adapted to live in some of the harshest conditions on earth, the Arctic fox can survive in temperatures as low as -58˚F (-14˚C). 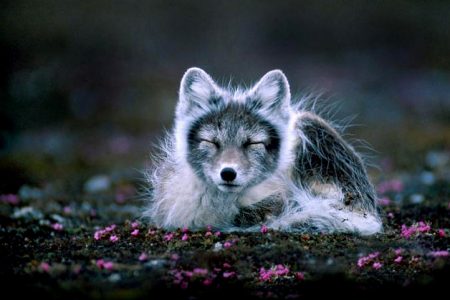 Amazing Facts About the Arctic Fox

Arctic foxes are one of the iconic animals of the Arctic tundra. Their pure white coats camouflage them as they travel vast distances across this hostile environment in search of prey. Once killed for their fur, a hunting ban means that their populations are recovering, but climate change threatens now to fundamentally alter their environment and is forcing them to compete with red foxes.

What does the scientific name Vulpes lagopus mean?

Vulpes lagopus, which is the Latin name for Arctic fox, means ‘hare-footed fox’. This is due to the presence of fur on the paws, which reduces heat-loss and enables them to walk better on ice.

Adapted to survive in harsh conditions, Arctic foxes have round compact bodies, short legs, short ears and small muzzles, all of which help to reduce the surface area exposed to cold air.

The deep, thick fur is the warmest of all animals and helps to maintain a consistent body temperature. Camouflage is important, so fur varies in colour depending on environment and time of year. In summer, individuals that inhabit snow covered areas are white, whilst those that live on rocky shores are brown. Fur is shed in spring to reveal grey fur underneath.

How long is an Arctic foxes tail?

Arctic fox tails are around 13 in long and are used to mostly to aid balance, but they also act as a blanket, as the can be curled around the face to protect their nose from the cold.

Where do Arctic foxes live?

The Arctic fox inhabits the Arctic Tundra including Alaska, Canada, Greenland, Russia, Norway, Scandinavia and Iceland; In Iceland, the Arctic fox is the only native land mammal. It inhabits some of the harshest conditions on earth, where temperatures can fall as low as -58˚F (-14˚C).

Arctic foxes are very mobile, and will travel large distances across land and sea ice in search of food. They live in burrows which can be hundreds of years old and passed down through generations of foxes.

What do Arctic foxes eat?

Arctic foxes are omnivores, although the majority of their diet is made up of small mammals including lemmings, voles and hares; lemmings are their favourite, to the extent that Arctic fox populations can fluctuate depending on lemming numbers. Their opportunistic nature means they are also known to follow polar bears and wolves around, scavenging their leftovers.

In summer months when food is scarce they have been known to eat berries, and will store food in their dens to keep for later.

How to Arctic foxes locate their prey?

Arctic foxes have incredible hearing that allows them to identify the precise location of their prey under the snow. To catch their prey, they leap up in the air and pounce down into the snow on the prey below.

In summer, they can live in family groups consisting of one male, two females and the pups, also known as kits. Only one of the females reproduces, the other is a kit from the previous year that remains with the group to look after the new borns.

How many kits to Arctic foxes have?

Arctic foxes mate for life. Both parents help to raise their pups, which are known as kits; the males source food and guard the den from predators such as polar bears.

Breeding season is from February to June, and females will give birth 49–57 days after mating. Females can have two litters a year, which range in size from 6 to 14 kits depending on food availability.

What is the biggest threat to Arctic foxes?

Climate change is causing surface temperatures to rise globally, but in the Arctic average temperatures are rising at almost twice the rate of the rest of the world. Reduced sea ice, rising sea levels and melting permafrost are just some of the impacts. Alterations to habitat and changes to prey availability have the potential to affect Arctic foxes. The warming climate means red foxes, which are bigger and more dominant than Arctic foxes, are expanding their range northwards. Territories of these two species are now overlapping in some areas, and as result Arctic foxes are thought to be retreating.

What is being done to help Arctic foxes?

Hunting for fur has impacted Arctic fox populations previously, but hunting bans mean this is less of an issue now, although populations are still recovering.