Described as ‘living fossils’, alligators have been here since around the time dinosaurs went extinct. They might have a reputation for being tough, but alligators are amongst the most attentive parents in the reptile world, remaining with their young for as long as three years. They are also highly intelligent, and have been known to use tools. 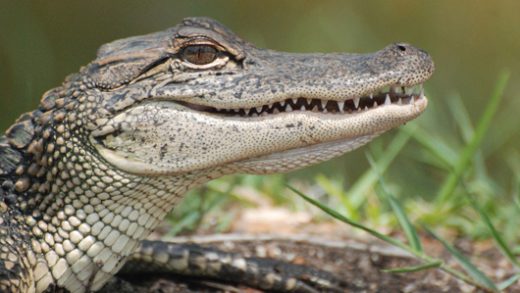 Amazing Facts About the Alligator

There are two living species of alligator in the world: the American Alligator (Alligator mississippiensis) and the Chinese Alligator (Alligator sinensis). The American Alligator is the official state reptile of three states in the US: Florida, Mississippi and Louisiana. The alligator is often described as “a living fossil” as it has evolved little over the past 65 million years. That means that alligators were basking in rivers around the time dinosaurs became extinct.

Alligators also feature as symbols and in the folklore of cultures across the world. In North American shamanism, alligators are symbols of status, adaptability and survival. In the Pacific Islands, alligator teeth were worn as necklaces to protect the wearer from illness. In Chinese folklore, the alligator was viewed as a water deity related to dragons.

How do I tell the difference between an alligator and a crocodile?

Although often confused with crocodiles, alligators can easily be distinguished from crocodiles by the shape of their snout. While alligators have broad u-shaped snouts, crocodiles’ snouts are v-shaped.

Where do alligators live?

The alligator’s habitat is freshwater environments such as rivers, swamps, marshes and lakes. The American Alligator can be found from North Carolina to the Rio Grande in Texas. While the Chinese Alligator was once widely distributed across the eastern part of the Yangtze River, its range is now restricted to a small sections of the river.

Alligators shelter in burrows which they dig into mud banks and soil. These burrows are ecologically important as they are used for shelter by other animals once abandoned by the alligators. They also act as a water source, an asset that becomes increasingly valuable in the drier seasons.

How do alligators give birth?

Once mating is complete, female alligators construct nests made of vegetation and mud. They can lay over 50 eggs on these nests in a single season. Alligators are amongst the most attentive parents in the reptile world, tending to remain with their young and care for them for as long as three years. Check out this video that shows a newborn alligator hatching from an egg!

What do alligators eat, and how do they catch their prey?

Alligators are mainly carnivorous although they have been found to also eat fruit such as elderberries, citrus fruits and wild grapes. As juveniles, they primarily feed on insects, spiders, worms, snails and small fish. As they reach adulthood, they start to consume larger prey such as birds, turtles, snakes, mammals and larger fish.

Alligators are opportunistic feeders who ambush their prey rather than chase them. They can reach 30 miles per hour in a short burst, however cannot maintain a high speed. 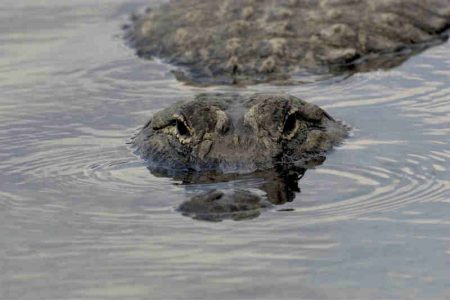 Alligators have even been found to use tools like sticks to help them hunt. They rest submerged in the water with sticks on their heads, attracting birds that are seeking twigs to build nests. Alligators seem to only behave this way during the nesting season when there is a shortage of sticks and therefore high competition between birds for nest material.

How many teeth do alligators have?

Alligators can have up to 80 teeth at any given time. New teeth grow to replace worn ones and throughout a lifetime an alligator can have between 2,000 and 3,000 teeth.

Are alligators dangerous to humans?

Alligator attacks are rare, and fatal ones unlikely with just 6% of American Alligator attacks leading to human death. Alligators generally target prey items smaller than humans, such as birds, small mammals and other reptiles. However, increased human encroachment into alligator habitat has raised the risk of conflict. Nevertheless, alligator attacks can be easily avoided. Preventative measures include observing alligators from a distance, avoiding feeding them and not swimming at night or in waters that might be inhabited by large alligators.

What is the conservation status of alligators?

In contrast, the Chinese Alligator is critically endangered with fewer than 120 remaining in the wild. Their decline is mainly due to the widespread conversion of their habitat to agricultural land.