Meet Africa's most successful hunter! By working together, African wild dogs are able to take on prey much larger than themselves and their success rate is 80% - that's far more than lions, who kill successfully 30% of the time! 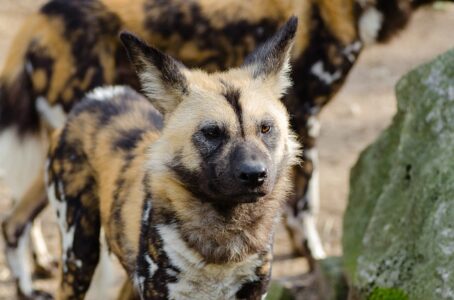 Image by Pexels from Pixabay.

African wild dogs go by many names and may be called painted wolves, painted hunting dogs or African hunting dogs. They are at home in the deserts, forests and grasslands of Africa, where they work together to hunt their prey and defend their territory from rivals.

African wild dogs are about the same size as a domestic Labrador. Their distinctive coats are mottled with black, brown, white and yellow, and each individual’s coat is unique, like a fingerprint!

They have slim bodies, large round ears, black muzzles, long legs, and a tufted tail (usually with a white tip).

African wild dogs are sociable and live in packs of between 10 to 50 dogs. They form strong bonds, and all look out for each other, working together to hunt, protect the territory and look after young, old and injured pack members. An alpha pair lead the way and are the only ones who breed.

Territories can cover an area of over 1,000 km/sq. If there is a lot of food around, they are likely to be smaller, though, as they don’t need to travel so far to find the food they need. When they are not hunting, African wild dogs spend their time resting from the heat near waterholes, their large ears helping to dissipate heat and keep them cool.

What do they hunt?

African wild dogs work together to catch food – they are the ultimate cooperative hunters. What they hunt depends on pack size – larger packs can take on bigger prey such as wildebeest or zebra, while smaller packs hunt antelope.

Their hunting strategy is simple. Using their excellent eyesight, they locate a herd and approach in full view during the cooler parts of the day. Once the herd stampedes, they follow them and pick out the weakest member, running them to exhaustion and stopping them from rejoining the others. It is a very successful strategy that has got them the top spot for hunters in Africa -up to 80% of their hunts end in kills. Lions only win 30% of the time!

Up to 60 km/h! This is slower than their prey, but they have fantastic stamina and can run over large distances, with some chases carrying on for 6 km. They don’t run at full speed the whole time, though. They warm up like an athlete, starting with a walk, a trot, and then a run.

How do packs communicate?

African wild dogs are fantastic communicators – it’s the secret to their hunting success!

Before a hunt, they engage in a noisy ‘warm up’ session where they bound around wagging their tails, licking and rubbing against each other while whining and making twittering calls. During hunts, they communicate with high-pitched yapping calls and a distinctive ‘hoo’ call that summons any dogs separated in the chase to the kill.

African Hunting Dogs also communicate through touch and behaviours that many of us would recognise in our own domestic dogs – adults and puppies lick the faces of other pack members in a friendly signal to beg for regurgitated food.

What challenges do they face?

African wild dogs are one of the most endangered carnivores in the world – they occupy less than 17 % of their historical range, and there are only around 6,000 individuals left in the wild.

Like many animals, their biggest threat is humans. As our populations grow, we take away their homes, split their habitats in two and take their food for bushmeat. This puts them at risk of extinction and creates competition between packs. It also brings them into contact with humans who treat them as pests and kill them to protect themselves and their livestock. They are also vulnerable to road accidents.

The biggest natural threats to African wild dogs are lions and broken legs. Their hunting technique is so fast and frenzied that many dogs injure their legs during the chase. They are also vulnerable to diseases such as rabies and canine distemper, which can be caught from domestic dogs.

How are they protected?

African wild dogs range so widely that conservationists must work together to protect them. Some of the measures in place include: