Aardvarks look a bit like pigs, with rabbit-like ears and a kangaroo’s tail, yet they are not related to any of these animals. In fact, one of their closest living relatives is the elephant! 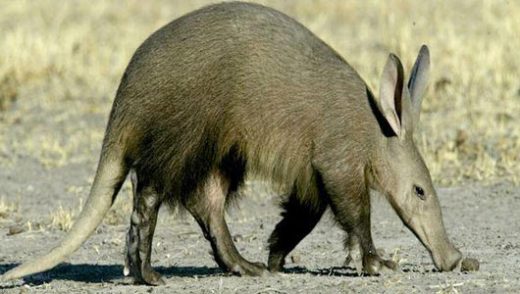 Amazing Facts About the Aardvark

Aardvarks are tough mammals that live throughout Sub-Saharan Africa. They can eat 50,000 ants in a night and are brilliantly adapted to digging with their spade-shaped feet. Aardvarks are a vital part of the ecosystem as they are prey for many species, and their old burrows provide homes for other animals such as African Wild Dogs.

Where does the name Aardvark come from?

Aardvarks are distinctive looking animals with a pig like an appearance.

They have a stout body with an arched back, long thin head and neck and long tubular ears that are usually held upright but can be folded down. The hind legs are longer than the front ones, and they have powerful spade shaped feet and claws that are perfect for digging.

Aardvarks are pale yellowish-grey in colour with short fur on the head and tail and long fur on the legs. Their tails are muscular, cone-shaped and approximately 70 cm (28 in) in length.

Where do Aardvarks live?

Aardvarks are found in a wide variety of habitats in Sub-Saharan Africa, which is the part of Africa below the Saharan desert. They favour areas with ample supplies of ants and termites such as savannas, grasslands, woodlands and bushland but tend to avoid rocky or swamp areas, as they are less suited to digging.

Aardvarks are nocturnal, sleeping in underground burrows during the day and coming out at night to feed. When breeding, burrows can be extensive networks of over 10 m (33 ft) in length and with multiple entrances. The layout of the burrow can be altered frequently, and it is not unusual for aardvarks to leave borrows and move on to new homes.

What happens to abandoned Aardvark burrows?

Old aardvark burrows are good for the ecosystem as they often inhabited by smaller animals like the African Wild Dog.

What do Aardvarks eat?

Aardvarks feed almost exclusively on ants and termites and are known to eat around 50,000 in one night. They can eat plants and often feed on an African cucumber known as the aardvark cucumber. The relationship between aardvarks and aardvark cucumbers is symbiotic, meaning both species benefit. The aardvark gets a source of food, and the cucumber benefits as the seeds are released into the environment when the aardvark defecates.

After sunset, they leave their cool burrows and forage over many kilometres in grasslands and forests for their favourite food, termites, swinging their long nose from side to side to pick up the termites’ scent.

How are Aardvarks adapted to eating insects in the soil?

As well as their powerful feet and claws that aid in digging, aardvarks have sticky wormlike tongues that can be up to 30.5 cm (12 in) long.  Their hair is thick around the nostrils, which acts to filter dirt when eating, and the nostrils can be closed fully to prevent dirt getting in.

Do Aardvarks get bitten by termites?

Aardvarks feed on termites, which do bite them, but aardvarks have tough skin which protects them.

What predators do Aardvarks have?

Aardvarks are prey to many animals including lions, leopards, hunting dogs, hyenas, and pythons.

Aardvarks have a keen sense of hearing that enables them to detect approaching predators. If they need to escape, they can dig fast or run in zigzags. If not, they can strike with their claws, tail and shoulders, and have been known to flip onto their backs and lash out with all fours.

If attacked in the tunnel, aardvarks can seal the tunnel off behind them or turn around and attack with their claws.

When do Aardvarks give birth to cubs?

Aardvarks are solitary and only come together to mate; females have a gestation period of seven months. One cub is born between May and July and will remain in the burrow for the first two weeks of life. Cubs start eating termites at around nine weeks of age, and start digging burrows at six months, but remain with the mother until the following mating season.

What are the greatest threats to Aardvarks?

Aardvarks are listed as least concern by the IUCN Red List of Threatened Species.

The extent of threats is mostly unknown, and no particular conservation measures are in place currently. Potential threats include the bushmeat trade, subsistence hunting and habitat loss due to agriculture.